1.Why did You choose Mileva Maric to tell the story of a female physicist who wanted to make her dreams come true? Or is it more a story of Albert Einstein, seen from the point of view of his wife? Why is this story important today, for the new generations?

I’m physics, and I tell the stories of 20th century physicists in my novels. I created a method that Italian newspapers have called “the Greison method”: that of writing the novels after going to the places where the stories are set, and doing interviews and research. With the stories that I tell in my novels I then create theatrical performances, and I am the one who plays those stories myself on stage. I set myself a rule: for every man (great scientist) of the twentieth century that I tell, in parallel I impose myself to find a story of a female scientist who in those years was hidden, belittled, opposed by the male chauvinist society of the time. And so I created a book about Albert Einstein (called “Einstein forever”), and a book about Mileva Maric (called “Einstein and I”). From the book “Einstein and I” I took the play of the same name, and the beautiful thing was that this play was asked me all over the world. I went to do it everywhere in Italy (a hundred times in 100 different theaters), and then also in Vienna-Austria, Zurich-Switzerland, San Francisco-America. The interest in Mileva was very high, more than for Einstein.

From my stories Mileva has become the symbol of the change taking place, that is, the person who makes the whole world say: now things have changed, thanks to her, thanks to what she had to endure.

I am not talking about Mileva’s contributions to Einstein’s physics, I am talking about the society of the time that hindered Mileva in obtaining her degree: they did not allow her to continue her studies, and to realize her dreams of becoming a scientist, and they opposed her in every way. First because she had an illegitimate daughter, and she wasn’t even married; then because she had two children and couldn’t abide by the rules imposed by the ETH Zurich: after two exam attempts to obtain a degree, they flunked her and she was no longer admitted to the courses.

I proposed to the ETH Zurich a posthumous degree for Mileva, to make all the girls understand that times have changed today, because they need signals from society.

To my proposal, after 4 months of discussions, the ETH replied that “by applying the rules they cannot give a degree to Mileva”. But it is precisely the rules of time itself that have not given it to him! And they told me that in any case, posthumous degrees provide that the person can withdraw it in person! But how?

In Italy after I wrote the epilogue of this story (on newspaper La Repubblica) a lot of University would like to give posthumous degree to Mileva Maric, and wrote me. And hundreds of people from all over the world have written to me their solidarity in this request I made to the ETH, and they tell me to keep on going. I’m not doing anything for now. I would like the ETH to change its mind, and attribute to Mileva the posthumous degree, no hurry, with the times they want. It would be nice if they didn’t just look at the rules, and invented a degree for Mileva (her case is unique in the world), it would be a signal for the girls of the new generations. Both I and they know the story of Mileva, and the reasons I bring up are in the answer they gave me.

2.In what way Mileva inspired You personaly, as a scientist and a woman? Are there others, who You look upon? Those mentiond in your books about the “(super)ladies who changed the world”?

Yes, in another book I wrote, I mentioned Mileva. The book is called “Six Women Who Changed the World”, and I talk about Marie Curie, Lise Meitner, Hedy Lamarr, Rosalind Franklin, Emmy Noether e Mileva Maric. Yes, these women are all scientists, and all different in being women. Each one lived their femininity in a different way, and this I really enjoyed telling. Put together, all united, they give an idea of the complexity of a woman today. We are Marie, Hedy, Lise, Rosalind, Emmy and Mileva, all together. Sometimes we are more one, sometimes we are more another, depending on the mornings as we wake up, and the situations we experience during the day.

3.How and when did You get the idea for a monologue „Einstein and me“? In what way is it incorporated in the book with the same name?

The monologue “Einstein and I” tells the life of Mileva, and Mileva is me, telling the story in the first person. I start the story when I enter the Polytechnic and start taking lessons. I’m very prepared, a real nerd, and I’m the only woman. The classes go on and there’s a guy who starts courting me. The story goes on like that, from Mileva’s point of view. It starts in 1896 and ends in 1930.

4.Is the novel „Einstein and me“ based on a true events, or is it more a metaphora of a relations between two talented scientists, two young people in love, two different individuals sharing private and profesional life?

The show “Einstein and I” features 4 seasons, which are the 4 seasons we all live. When Mileva starts taking classes it’s summer, he’s making his dreams come true, and he’s trying hard. Then comes autumn, something is starting to go wrong. Then winter comes, and things are going to get bad for her. But then I give her spring, again, she blooms again, because she becomes me, and all of us, today, making our dreams come true.

5.Have You visited some places in Serbia as well, after Zurich and Bern, linked to Mileva?

I have never visited Serbia yet, when I will come to play my show in Serbia because my book will be translated into Serbian, I would like to visit the house of Mileva and the symbolic places.

While Zurich and Bern have been there a lot for my research.

Then I’ve also been to America a lot.

6.What documents and biografical books on MM and AE did You use for the research?

I’ve searched the archives, both in Zurich and Bern. And I went to Hebrew University where the Einstein Archive is kept. And then I went to Princeton, New Jersey. The books I looked at are all the existing biographies of the two, in all languages. And then the letters, and then so much material that the professors and archivists got me.

7. You are physicist, writer, journalist, actress… You became known with the “Quantum Monologue” that has toured all over Italy, exceeding 450 replies and for the most part sold out, but there are also eight books You wrote, Your work on popularisation of science on RAI, Your articles in La Reppublica. You iniciated Festival della Fisica. How did You managed to do all this succesfuly, and to have a personal life as well? What kind of sacrifices You had to make?

I can do all this because I live in the middle of the woods in the middle of nowhere. It’s a very small village, behind Genoa, in Liguria. I live in contact with nature, and I don’t have much interference with the life of big cities. I move only when I go to the theatre.

I’ve been living this life for five years. I live in a forest, with trees, I heat the house with wood in the fireplace and stoves, I eat natural food.

And so I’ve created an inner world with which I can dialogue and create all this.

8. Are You preparing some other monologues based on the life and work of famous (nuclear or other) scientists? When will You visit Belgrade to perform on the stage “Quantum Monologue” or the monologue „Einstein and me“?

I will take the show “Einstein and I” to Belgrade at the end of April, and also to Novi Sad. I will communicate the exact dates on my website www.GreisonAnatomy.com and on my social networks (facebook, twitter, instagram, youtube) named “Greison Anatomy”. It will be beautiful!

9.What is you message to Serbian riders of „Einstein and me“?

There’s a lot of us, we can change things.

And then the great message of Mileva: don’t be with those who don’t make you bloom.

Thank You very much.

There are no comments 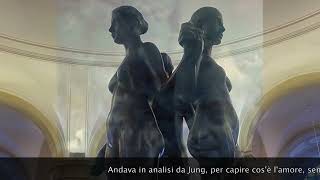 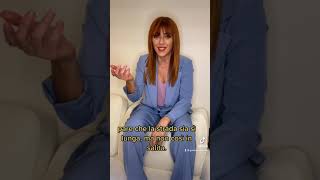 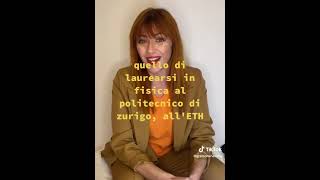 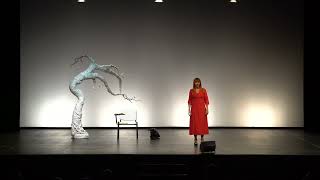 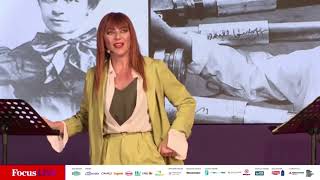